#DYK that oysters are tasty and nutritious, all while helping the environment?  This shellfish plays a crucial role within our ocean ecosystems, and we’re about to tell you how.

You might have seen our social media post that included a teaser video for the Ocean to Table Episode featuring Lady Island Oyster in South Carolina, where Frank and Julie talk about farming oysters to meet specific culinary tastes and why it can be good for the environment. They also share tips for shucking oysters! This is a fabulous (and beautiful) intro to the world of oysters!

Lady’s Island Oyster Inc. (South Carolina) from Aquarium of the Pacific on Vimeo.

Here is some more information on just how great oysters really are and how oysters benefit you and the environment.

Like most seafood, oysters are high in protein and low in calories. This shellfish is a good source of selenium, copper, iron, and vitamin B12. They are also very high in zinc, with just one 3-ounce serving more than doubling the daily recommended intake of zinc for adults. Zinc plays an essential role in the immune system and has been shown to reduce the duration of the common cold when provided as a supplement during the early stages.  Short answer, eating oysters can support your immune health and stave off colds!

Oysters and the Ecosystem

Oysters are great for the ecosystem because they’re a natural filtering system of algae in the water. It’s important that oysters eat algae because algal blooms can reduce the ability of fish and other aquatic life to find food and can cause entire populations to leave an area or disappear altogether. Oysters also filter out other pollutants such as nitrogen and phosphorus with the ability to filter about 50 gallons of water per day, PER OYSTER! That’s crazy!

Shellfish, like oysters, can actually improve water quality and clarity by removing particulates, excess nutrients, organic material, viruses, and other bad things from the water. Their filtration process enhances the habitats for seagrasses such as eelgrass and other submerged aquatic vegetation. 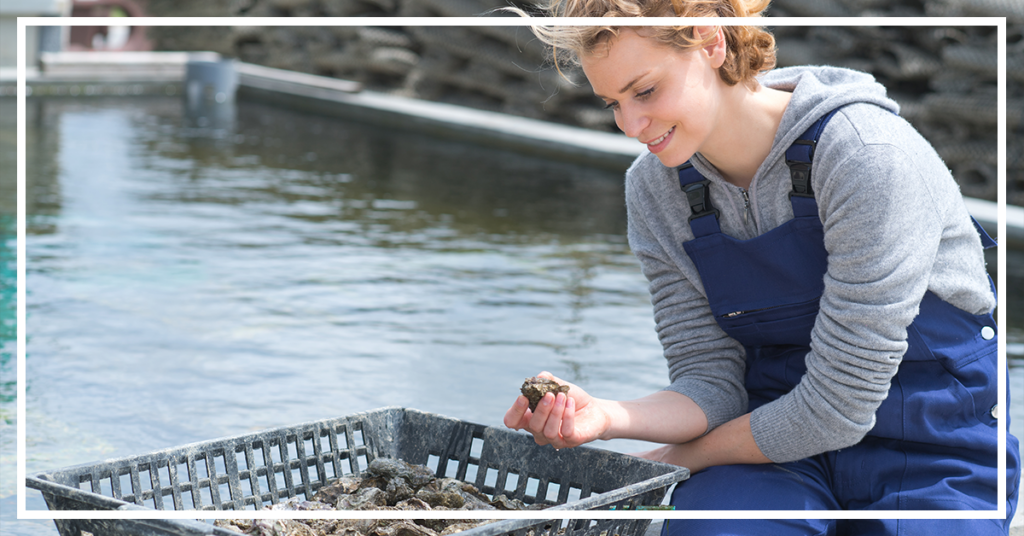 Farming oysters, clams, and mussels have long been seen as one of the most sustainable methods of seafood production. Because you can recycle used oyster shells to help juvenile oysters grow, one oyster shell can help production over and over again! By farming, instead of pulling oysters straight from the water, farmers can control their environment and growth more easily to ensure that their oysters are exactly where farmers want them to be.

We also encourage you to watch another episode of Ocean to Table, which takes you to Tomales Bay in California to meet farmers Terry Sawyer and John Finger at Hog Island Oyster Company. They are joined by Chef Stuart Brioza from State Bird Provisions & The Progress, and scientists Sarah Lummis from UC Santa Cruz and Sarah Newkirk from The Nature Conservancy to talk about their collaborative efforts to research the relationship between eelgrass and oyster farms.

Hog Island Oyster Company (California) from Aquarium of the Pacific on Vimeo.

As you think about the many benefits of oysters, you might be feeling a bit hungry so we are sharing this recipe we think you might enjoy. Don’t forget, the world is your oyster so Eat Seafood, America!