Seafood and the Environment

What is SNP’s advice for eating sustainable seafood? Which seafood sustainability guide do you recommend? Learn More Learn about the large body of scientific evidence and seafood research that support eating seafood at least twice a week. Eat seafood with confidence. The real risk is not eating enough!
Here are a few facts about seafood requirements versus mercury risks, what science shows about safe limits, what fish and shellfish you should choose, and what to avoid too much of.

Fish literally saves lives. Eating seafood two to three times per week reduces the risk of death from any health-related cause by 17 percent.

Seven out of 10 deaths in the U.S. are preventable through nutrition and lifestyle changes, like adding omega-3s to your diet. Low seafood intake contributes to 55,000 deaths each year, making seafood deficiency a leading dietary contributor to preventable death in the U.S.

Neonatology Today: Pregnant women today are mindful of the importance of prenatal care and prevention, particularly with respect to nutrition. The National Coalition for Infant Health, together with Neonatology Today, released seafood advice for mothers and their babies.

American Journal of Clinical Nutrition: Dr. Emily Oken of Harvard Medical School concludes the science on benefits and lack of harm from prenatal fish consumption is settled for now, that seafood consumption by pregnant women is in fact beneficial for baby brain development and shows no harm.

Japan Environment and Children’s Study found “maternal fish intake during pregnancy was independently associated with reduced risk of delay in problem-solving at age 6 [months] and in fine motor skills and problem-solving at age 1 [year].” The study also found, as summarized by Oken, “None of the results suggested harm from higher fish consumption.”

PLEFA: A paper published by a group of 13 leading dietary fats scientists highlights the tremendous health benefits from consuming seafood for infant and adolescent brain development. Among the key findings of the systematic review is an average 7.7 IQ point gain in children whose mothers ate seafood during pregnancy compared to mothers who did not eat seafood.

FAO/WHO: A joint FAO/WHO Expert Consultation on the risks and benefits of fish consumption concluded that the benefits of eating fish outweigh the risks. Babies from moms who ate seafood twice a week were observed to have a greater IQ by 5.8 points. The study shows benefits for improved IQ and heart health.

AND: The Omega-3 fatty acid docosahexaenoic acid (DHA) is critical for the development of the nervous system, especially during the first year of life according to a study in the Journal of the Academy of Nutrition & Dietetics.

A recent study led by Dr. Christopher Ramsden published in the British Medical Journal found that people who followed a diet high in the omega-3 fats found in fish and shellfish, and low in omega-6 fats found in many processed foods, showed a decreased frequency and severity of headaches. Participants ate foods including wild salmon, albacore tuna, and trout while minimizing sources of omega-6 fats such as corn, soybean, and canola oils.

Recently approved migraine medications have been shown to produce two to two and a half fewer “headache days” per month, which is less than the four-day reduction caused by the high omega-3, low omega-6 diet. “Four days per month really outperform anything we’ve seen from a pharmacological preventive,” said Dr. Rebecca Burch, a headache medicine specialist at Brigham and Women’s Hospital and an assistant professor of neurology at Harvard Medical School. (1)

“As calcium is to the bones, DHA is to the brain,” says Dr. Tom Brenna, member of the 2015-2020 Dietary Guidelines Advisory Committee. Seafood provides docosahexaenoic acid (DHA), a type of omega-3 essential for brain development and function, helping neurons trigger and cells regenerate. 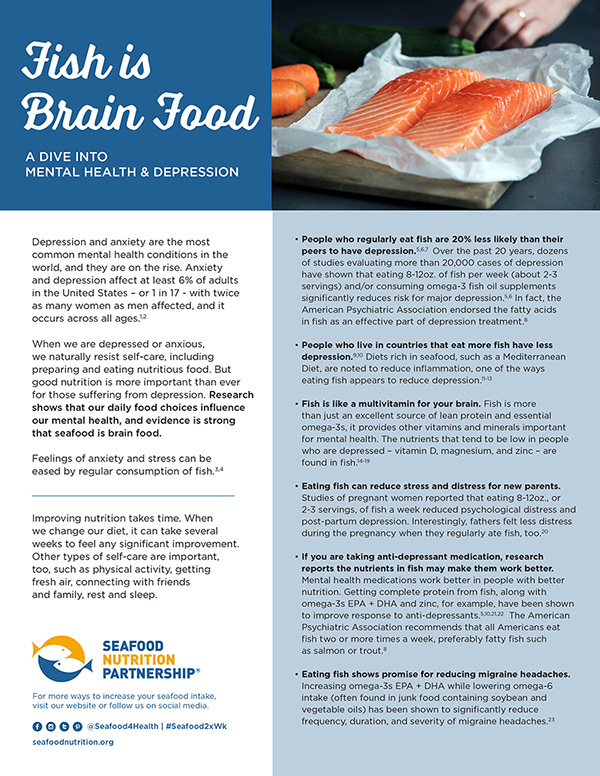 It is important to remember that our daily food choices influence our mental health as much as other self care such as physical activity, connecting with friends and family, and sleep. And the evidence is strong that seafood is brain food.

People who regularly eat fish are 20% less likely than their peers to have depression. Eating 2-3 servings of seafood a week significantly reduces the risk for major depression, which is why the American Psychiatric Association endorse the omega-3 fatty acids in fish as an effective part of depression treatment.

UCLA: A study in the American Journal of Preventive Medicine led by Dr. Cyrus Raji found that people who regularly eat fish have more voluminous brains than those who do not. This study found that eating fish—baked or broiled, never fried—is associated with larger gray matter volumes in brain areas responsible for memory and cognition in healthy elderly people.

“If you have a stronger hippocampus, your risk of Alzheimer’s is going to go down,” said Dr. Raji.
Link to article in Atlantic

People who regularly eat fish are 20 percent less likely than their peers to have depression. In fact, the American Psychiatric Association has endorsed the fatty acids in fish as an effective part of depression treatment.

HARVARD: A study from Harvard School of Public Health and the University of Washington found that older adults who had the highest blood levels of the omega-3 fatty acids found in fish lived, on average, 2.2 years longer than those with lower levels.

AHA: A scientific advisory released May 2018 from the American Heart Association reaffirms the Association’s recommendation to eat two servings of fish per week: Seafood Long-Chain n-3 Polyunsaturated Fatty Acids and Cardiovascular Disease: A Science Advisory From the American Heart Association. This Advisory summarizes evidence to support the beneficial effects of long-chain polyunsaturated fatty acids (LC n-3 PUFAs) from seafood on cardiovascular disease and stroke. This summary is consistent with the AHA 2020 impact goals to include seafood as part of the healthy dietary pattern goals and the 2015 AHA Diet and Lifestyle Recommendations.

HARVARD: Drs. Mozaffarian & Rimm found that eating approximately one to two 3 oz. servings of fatty fish a week—salmon, herring, mackerel, anchovies, or sardines—reduces the risk of dying from heart disease by 36 percent. Heart disease is the #1 killer of Americans taking almost 600,000 lives each year per the CDC.

NEJM: In the Physicians’ Health Study, 22,071 male physicians were followed over 17 years, found that those with the highest blood level of long-chain omega-3 fatty acids compared to those with the lowest blood level had an 80-90% risk reduction in sudden cardiac death per New England Journal of Medicine.

NEJM: A Mediterranean diet that includes seafood at least twice a week reduced the incidence of major cardiovascular events according to the New England Journal of Medicine.

​WHO: ​Up to 80% of cases of coronary heart disease, 90% of type 2 diabetes cases, and one-third of cancers can be avoided by changing to a healthier diet, increasing physical activity, and stopping smoking per World Health Organization.

Meet the Members of the Scientific Nutrition Advisory Council

Dr. Tom Brenna is professor of pediatrics, of chemistry, and of nutrition at the Dell Medical School and the College of Natural Sciences at the University of Texas at Austin, and recently Professor Emeritus at Cornell University. He has served on numerous international policy groups, including the 2015 Dietary Guidelines Advisory Committee.

Sara Baer-Sinnott is President of Oldways, a nonprofit food and nutrition education organization, with a mission to guide people to good health through heritage.

Dr. Susan E. Carlson is the AJ Rice Professor of Nutrition and University Distinguished Professor at the University of Kansas Medical Center. She does clinical trials of DHA supplementation in pregnancy and childhood.

Linda Chaves is the founder of Chaves Strategies, a consultancy working on seafood and health, international trade, aquaculture, ecolabeling and certification, and industry advocacy. She previously worked at the U.S. Department of Commerce’s National Marine Fisheries Service.

Ms. Sonja Connor, MS, RDN, LD is a research associate professor in the Division of Endocrinology, Diabetes and Clinical Nutrition, Department of Medicine, School of Medicine, Oregon Health & Science University. She also has been very involved with the Academy of Nutrition and Dietetics and served as president in 2014-15.

Dr. Harris is an internationally recognized expert on omega-3 fatty acids and how they can benefit patients with heart disease. He is president of Fatty Acid Research Institute.

Dr. Joseph R. Hibbeln is a renowned Omega-3 expert and practicing psychiatrist with Barton Health. He is formerly Acting Chief, Nutritional Neurosciences in the Laboratory of Membrane Biophysics & Biochemistry, NIH.

Dr. Bruce Holub is University Professor Emeritus, Department of Human Health & Nutritional Sciences at the University of Guelph. He is the founder of the DHA/EPA Omega-3 Institute.

Dr. Penny Kris-Etherton, a world-renowned expert and national leader in food and nutrition, is Distinguished Professor of Nutrition in the Department of Nutritional Sciences at the Pennsylvania State University.

Dr. Bill Lands is a renowned Omega-3 expert, was Professor of Biochemistry at the University of Michigan and the University of Illinois, where he studied the metabolism of fats, phospholipids, and prostaglandins.

Dr. Maya Maroto is Vice President of Federal, State, and Municipal Partnerships at the Partnership for a Healthier America, where she is working to expand PHA’s current and future programs in pursuit of food equity.

Dr. Scott Nichols is the founder and principal of Food’s Future, LLC, which works to accelerate aquaculture’s contribution to our future food supply.

Dr. Norman Salem, Jr. is one of the world’s leading researchers on DHA omega-3 and the functions of polyunsaturated fatty acids and lipids.

Dr. Michael Tlusty is Associate Professor of Sustainability and Food Solutions at the University of Massachusetts Boston.

Gretchen Vannice is the Director of Nutrition Education and Research for Wiley Companies. She is a registered dietitian nutritionist and considered a global expert on omega-3s research and education.