Fish is one of the healthiest foods you can eat. That’s because it’s a great source of protein, micronutrients, and healthy fats — all of which have numerous health benefits for your overall health. There are hundreds of types of seafood you can select from that are both delicious and extremely safe to eat. Here’s a breakdown of what you need to know about mercury in seafood.

Mercury is a heavy metal found naturally in air, water, and soil. It’s released into the environment in several ways, including through industrial processes like burning coal or natural events like eruptions.

It is a common fallacy that fish is the only source of mercury. In a study with more than 10,000 pregnant women, researchers showed that seafood contributed to less than half of the mercury obtained from the diet, which in turn contributed about 20% of blood mercury. (1). Some of the other sources include dental amalgams (dental filling material used to fill cavities caused by tooth decay) and inhalation from the atmosphere.

A person can also be exposed by eating fish and shellfish because some animals absorb low concentrations of mercury from water pollutants. The predator species that live longer and tend to be larger have the most exposure.

Should I be concerned about mercury in fish?

The recommendations from the Dietary Guidelines for Americans are to eat a variety of seafood at least twice a week to reap the range of nutrients in different types of fish, and for men and women not trying to get pregnant there are no specific species you need to avoid.

In 2019, the FDA and EPA released advice urging pregnant women, breastfeeding moms, and young children to consume more fish and seafood, including all of the most popular seafood in the U.S. from salmon to canned tuna. The guidance listed seven fish to avoid during pregnancy due to higher mercury: shark, swordfish, king mackerel, tilefish, bigeye tuna (does NOT include canned tuna), marlin and orange roughy. (2)

Seafood also contains selenium, which is needed for our brain and nervous system to function. The mineral also protects us from mercury by binding to it. Seventeen of the top 25 food sources of selenium in the American diet are types of seafood. Yellowfin tuna, halibut and sardines are best choices for selenium ratio. 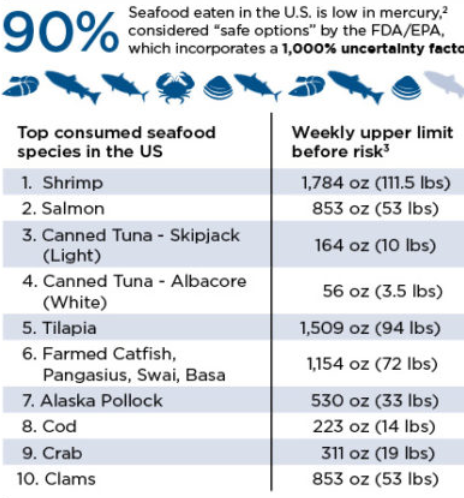 A chart within The Ultimate Guide to Making Smart Seafood Choices, shows the results from FDA’s “net effects” report, which looks at the upper limits of weekly seafood consumption:

Should I keep eating seafood?

Yes, keep eating seafood! Based on the research and health benefits associated with eating it – the real risk is not eating enough. In a recent paper published in PLEFA, scientists suggest that seafood provides overall nutritional benefits to neurocognitive development and outweighs potential harms from mercury in seafood. So whether you’re a pescatarian or considering a more fish-rich diet, keep eating it. Overall, you shouldn’t be afraid of eating fish. Fish is an importance source of omega-3 fatty acids and provide many health benefits. It is recommended by U.S government agencies to eat at least two servings of fish per week. To maximize the benefits and reduce any potential risk of eating fish, eat a variety of seafood.