There’s nothing that warms you up more – body and soul – than a nice bowl of seafood chowder! It’s most famously known for featuring clams (aka Clam Chowder), but did you know clam chowder varies in different regions of the U.S.? From coast to coast, there are more types of chowder than you could probably even imagine. We broke it down for you: 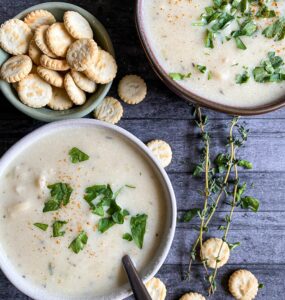 Manhattan Clam Chowder has a base of tomatoes instead of cream, hence being known as “red chowder.” It’s loaded with an array of vegetables such as carrots, onion, celery, and potatoes, like this one from Food Network. (Or a total spin on this version, with Monkfish and Cauliflower Chowder from Bon Appetit.)

In San Francisco, you can find most types of chowder in sourdough bread bowls, and in Seattle and Alaska, clams are swapped for salmon or cod — or both, like in this recipe for Alaska Cod and Smoked Salmon Chowder from Alaska Seafood.

Other varieties of chowder can be found all over the United States and even the world. Places such as Rhode Island (clear broth) and Long Island (combination of tomato and cream broth) have adopted their own variations, while other cities and chefs have created delicious recipes for fish and seafood chowders, like this Easy Fish Chowder recipe from Lindsay at The Lean Green Bean.

And if you care to travel abroad to taste test chowder, even Bermuda has its own type of fish chowder!

Check out our Pinterest board of Chowdah recipes for event more inspiration!