Cultural eating patterns and diets rich in seafood, such as a Mediterranean Diet, are noted to reduce inflammation, one of the ways eating fish appears to reduce depression.11-13

Eating 2-3 servings of seafood a week significantly reduces the risk for major depression, which is why the American Psychiatric Association endorse the omega-3 fatty acids in fish as an effective part of depression treatment.

“The notion of ‘prevention’ is relatively new to the mental health field but emerging evidence suggests that diet can have a significant impact on the risk of developing mental health disorders,” said Dr. Robert McNamara, Professor of Psychiatry and Behavioral Neuroscience at the University of Cincinnati College of Medicine. “For example, consuming fish, a rich source of long-chain omega-3 fatty acids, has been found to be protective against the development of major depressive disorder. This is also supported by evidence that different mental health disorders, including bipolar disorder, depression, schizophrenia, and ADHD, are all associated with low blood long-chain omega-3 fatty acid levels.”

Remember, improving nutrition takes time. When we change our diet, it can take several weeks to feel any significant improvement. Other types of self-care are important, too, such as physical activity, getting fresh air, connecting with friends and family, rest and sleep. 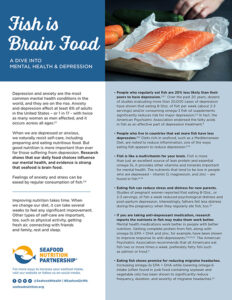 It is important to remember that our daily food choices influence our mental health as much as other self care such as physical activity, connecting with friends and family, and sleep. And the evidence is strong that seafood is brain food.

Moms: Why Many Kids Don’t Eat Seafood & How To Implement It In Their Diet