Every athlete strives for an edge over the competition. Daily training and recovery require an eating plan that matches these physical demands. This is why fueling properly is crucial for peak performance. An athlete’s diet is not hard to achieve, especially when you’re open to introducing seafood into your diet at least twice a week!

Professional sports teams work with dietitians for a number of reasons: athletes require a higher caloric intake, as well as the proper balance of macros, vitamins, minerals, and anti-inflammatory foods for optional performance. Many athletes, like NBA star Kevin Durant, chose fish before nearly every game because the lean protein sustains energy levels without weighing them down.

Sports stars such as Tom Brady, Nick Bosa, and Kevin Love all tout the benefits of a fish-forward diet.

Lesli Bonci is a sports dietitian who has worked for the NFL’s Kansas City Chiefs and Major League Baseball’s Pittsburgh Pirates and Toronto Blue Jays, in addition to Carnegie Mellon University Athletics. She loves “recommending seafood for [her] athletes as it’s a great source of protein and the omega-3s in certain fish provide immune system support as well as functioning as anti-inflammatory agents.” She works with the team’s chef to ensure seafood is highlighted on the menu and gets the players’ omega-3 levels tested along with their nutrient panel. Bonci adds that “Seafood is easy to prepare and quick to cook for those who would rather spend time working out than at the stove!” 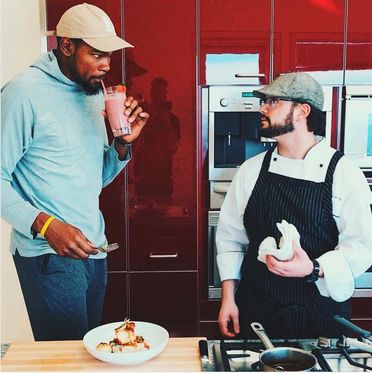 Seafood plays an important role in an athlete’s diet.

The International Society of Sports Nutrition lists fish as one of the best sources of high-quality protein for athletes. Fish provides a host of nutrients, including lean protein, essential fats, vitamins, and minerals, such as calcium, magnesium, zinc, iron, and vitamins A and D – each of which have been shown to be low in competitive athletes. These key nutrients in seafood are associated with positive health outcomes and help to fuel performance, endurance, and recovery.

Inflammation and training go hand in hand. Even though exercise is good for the body, training can be grueling and without proper recovery, it can take a toll. The omega-3 fatty acids found in seafood, such as salmon, provide protective benefits for the tissues and work to fight inflammation in the body.

For athletes, focusing on increasing omega-3 fats should be top of mind. Studies show omega-3s can also reduce the risk of heart disease, depression, dementia, and arthritis, and improve overall happiness. Prominent health organizations suggest eating a variety of seafood at least twice a week, aiming to consume an average of 250 to 500 milligrams of omega-3s EPA and DHA per day.

The long days spent training, grinding, and pushing past one’s limits cause muscle fibers to shred and then slowly repair during rest days. Protein is an integral key in that repair process. Protein can come from any animal source and also from many plant sources, but SEAFOOD is where it’s at. Seafood is a complete protein, meaning it contains all the essential amino acids needed by your body. Along with muscle repair, protein also plays a role in satiety or that ‘feeling of fullness.’  Although there are many vitamins and minerals required for performance, particular attention should be devoted to ensuring that athletes consume proper amounts of calcium, vitamin D, and iron. 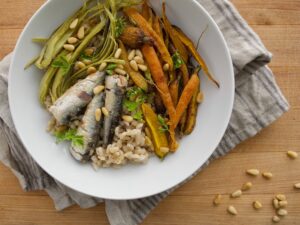 Calcium is important for bone health, muscle contraction, and normal enzyme activity. The daily recommended intake (DRI) of calcium is 1000 mg/day for adults. Calcium is contained in a variety of foods and beverages. Canned fish such as salmon and sardines contain bones that are softened during the canning process. (Canned salmon, with bones, contains 180mg for a 3-ounce serving.) Other non-seafood sources include milk, yogurt, cheese, broccoli, spinach, and fortified grain products.

Seafood is one of the few foods that naturally contain vitamin D. Vitamin D is important in bone health, but recent research also points out its essential role in extraskeletal functions, including skeletal muscle growth, immune and cardiopulmonary functions, and inflammatory modulation, which influence athletic performance. Vitamin D can also interact with extraskeletal tissues to regulate injury recovery and also influence the risk of infection. Food sources of vitamin D include the flesh of fatty fish, such as trout, salmon, tuna, and mackerel.

Iron plays an important role in energy metabolism. This important mineral is a critical component of hemoglobin, which is found in red blood cells and facilitates the transfer of oxygen from the lungs to the body’s tissues. Iron is especially important for athletes due to the high work demands placed on their muscles during training and competition. Mollusks are good sources of iron, this includes clams, oysters, and mussels.

With seafood’s health halo, it plays an essential role in an athlete’s diet. When it comes down to those final seconds on the clock, the edge you’re looking for, the recovery needed. When it’s about being faster, stronger, better. Fuel for success with seafood! Want to try the athlete’s diet, too? Hop over to our recipes page for delicious, quick, and healthy options!

To Fuel Your Fitness, check out this Dive Into Seafood for Sports Nutrition guide for more information on how seafood impacts performance.

(Citations for research cited above can also be found in the Dive Into Seafood for Sports Nutrition guide.)