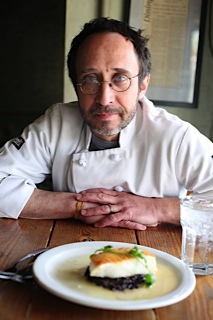 Chef Ben Smith is a great supporter of the importance of seafood nutrition. Ben was born and raised in Memphis, Tennessee. He graduated from the Culinary Institute of America in Hyde Park, New York. His love of seafood and the concept for his Tsunami Restaurant came from time in Australia, Hawaii, New Caledonia, New Zealand, Tahiti, and San Francisco, California.

His time at the Lodge at Koele in Lanai opened his eyes to the vast bounty of the Pacific Region, where he was exposed to a greater variety of seafood than ever before. It was in Hawaii where he first began to form his concept for Tsunami Restaurant. Ben opened Tsunami in 1998 to great acclaim and published The Tsunami Restaurant Cookbook in 2005. Tsunami has been voted Best New Restaurant, Best Seafood, and Most Creative Menu by Memphis magazine. He resides in Memphis, TN with his wife and three kids.